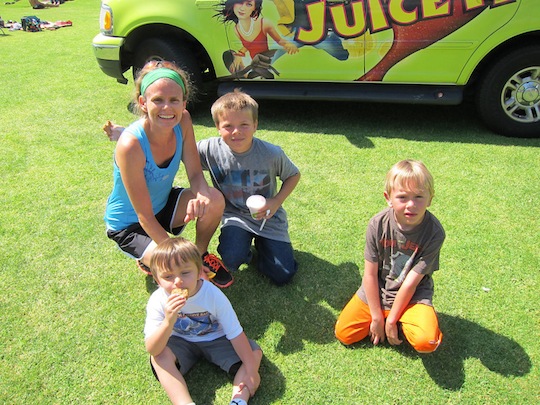 I starting training for this triathlon in September. I thought about how I was going to fit all the training in for months, but never implemented my plan until September. I am a full time working mom so trying to fit workouts in is challenging. I starting waking up early, early mornings….4:30 AM to go to 5-6 AM swim once or twice a week. 5:30 AM to get my morning runs in (runs 4X/week). I really didn’t bike that much…i tried to get the biking during lunch on Tuesday and Thursdays (when I worked at home). But sometimes that dang work got in the way and I was unable to go. My longest bike ride was 11.22 miles. Yikes

So, when i got to the starting line of the triathlon, I felt really good for the run, but was nervous for the bike and swim. I really didn’t think about the triathlon until a couple days before. I never had nervous stomach or anthing, which can be a bad thing.

And then I got to the swim start and I started to get really nervous. They made an announcement saying the “water is 58 degrees”!!! Wow. That’s cold. I had only done one open water swim in training and I was getting really nervous. My whole family was there to support me – David, Parker, Jon and David’s parents. David was so supportive during the training and race. I couldn’t have done it without him.

The buzzer went off and the swim began and it was COLD. I couldn’t breath for maybe the first 1/8 mile of the swim and I didn’t think I was going to make it. I had to do back and breast stroke because i just couldn’t breath. I could see the other women around me were doing the same thing..so that made me feel better. Finally I started to feel better and getting into the swim and was able to breathe. I finished in 19:24.7, which is better than I thought I would do.

The bike was a nice bike ride, 2 7 mile loops. It had just snowed in the mountains just 2 days before, so the mountains were covered in snow and beautiful. The air was crisp and felt good. But, People were passing my like I was standing still…the only peolple I passed were the ones riding 1970 bikes with rusty chains and with no clip-on shoes. But at least I passed some people!!! I finished the bike in 1:00:27.6, which was what I had estimated.

I felt good and strong starting the run…i didn’t feel that tired, which means I didn’t push it on the bike. The run was good and i was passing some people. I felt in my zone and was enjoying myself. And I knew that I was almost finished!!! As I approached the finish line I saw Parker and David!! They were yelling my name and it felt great to see them. I loved hearing my son call out “Mommy!”.

I crossed the finish line in 2:08 and felt great. I had finished and I knew that this was just the beginning. I could not have done it without my husband who got up at 4:30 AM to get me to the starting line (with the kids). Thanks David! I love you:)

Posted by MyMommyRun at 4:08 PM